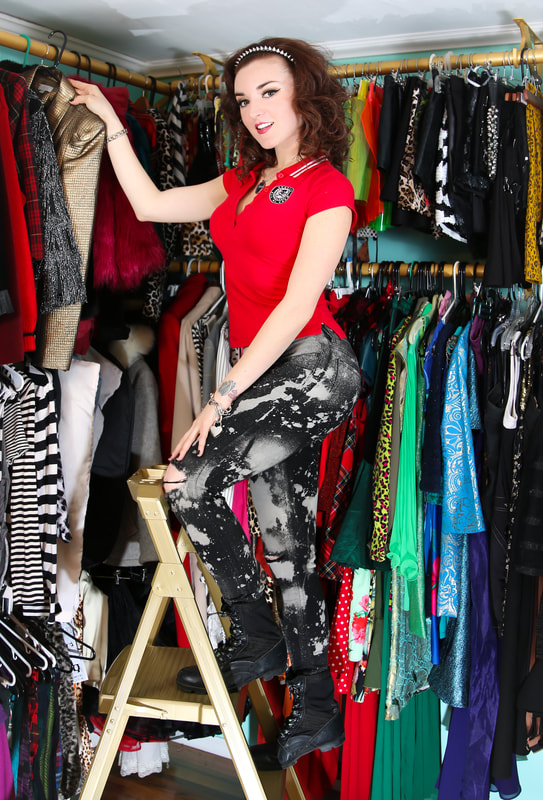 Since 2007, Erin Micklow has been working in the entertainment industry in Los Angeles as a professional model, SAG-AFTRA actress, and host where she styled herself, her hair and makeup on 95% of the projects she worked on. She is known for being able to depict a wide range of looks very well, specializing in retro & alternative styles.

Throughout her years of being in front of the camera, Erin has graced several magazine covers and has had dozens of magazine features from publications in the US and around the world. She has also achieved commercial success modeling for companies such as got2b hair products, Hot Topic, Steady Clothing, Unique Vintage, Lucky 13 Apparel, and many more. Some of Erin’s TV & film credits include Circus Kane, Millionaire Matchmaker, The Ugly Truth, MADtv, Chain Reaction & CSI: NY.

In 2008, Erin began her path a wardrobe stylist when she was hired to assist teach at dating workshops for men. Erin was hired to give the woman’s point of view while the host of the workshops gave the in depth advice. She advised on the way the men looked, and the men who were open to improving themselves hired Erin for image consulting & personal shopping sessions outside the workshops where she taught them how to dress.

In 2013, Erin branched out on her own as an independent stylist and image consultant putting looks together for clients for TV, film, music videos, editorial photo shoots, as well as red carpet events.
Her styling work has been featured on The Hollywood Reporter, Variety, The Insider, TMZ, Entertainment Tonight, UsWeekly, Yahoo!, AOL, Huffington Post & MTV. Among her services outside of entertainment jobs, Erin offers personal shopping trips, closet raids, & travel packing. With all of that, Erin has also authored numerous fashion columns giving tips & advice to thousands of readers for publications such as Naluda Magazine, Radiant Inc Magazine, DirtyandThirty.com, CafeYak.com, TheStyleGlossy.com & AngryYoungandPoor.com.

Looking good has been her job for many years so let Erin assist you in looking like your "best you" through her knowledge and expertise in the art of dressing to impress and looking appropriate at any occasion.